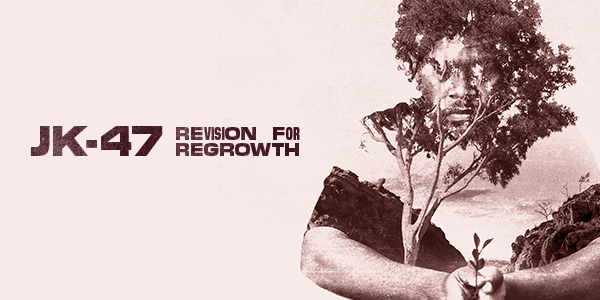 Adding fire to the wave of powerful new voices shaking up the culture, Bundjalung rapper, JK-47, will travel the country as he celebrates the upcoming release of his new album ‘Revision For Regrowth’.

Untitled Group, triple j, GYROstream, New World Artists and 88 Artist Management together with JK-47 are delighted to announce tour dates in support of the album this October/November. The tour will kick off in Adelaide on Friday 21 October, followed by Sydney, Fremantle then Melbourne. and finishing up in Brisbane on Saturday 5 November.

‘Revision for Regrowth’ is the rapper’s second album, giving an in-depth view into his learnings and personal progression since his NIMA-award-winning album debut in 2020. Following an incredible twist on 2pac’s “Changes” for Like a Version, the triple j Unearthed Artist of the Year Winner, has worked alongside producer Jay Orient to create the new record which promises to be rich in instrumentals with a new feel and flow. The debut single for the album ‘At One (reVision) ft. Nate G’ was premiered on triple j good nights, and has been featured on coveted Spotify playlists ‘New Music Friday AU & NZ’,  ‘The Drip’ and ‘Beats ‘n’ Bars’ as well as Apple Music playlist’s ‘New Music Daily’ and ‘BLAKLIST’.

Having already played at multiple festivals this year including Splendour in the Grass and Groovin’ the Moo - the second half of 2022 is set to be just as busy for JK-47. With five headline shows planned across the country, as well as spots on the lineups of two of Australia’s biggest summer festivals - Beyond the Valley and Wildlands, it’s clear the Indigenous artist is a force to be reckoned with.

The new era begins now. Don’t miss out as JK-47 returns to the stage in a mission to touch the hearts & minds of those not just across his home country, but around the world.

JK-47 is going in deep, releasing introspective new single with producer Jay Orient 'At One (reVision) ft. Nate G' which received a first play on triple j's Good Nights last night. The thought provoking track marks the first taste of his highly anticipated second album Revision for Regrowth and the beginning of a new era for the Bundjalung rapper.  From the first Japanese shakuhachi flute motif to the last bar, 'At One (reVision)' is a haunting reflection by JK-47 about...

The Wildlands line-up is here. Taking place this summer in Brisbane, Perth and Adelaide, Wildlands Festival will spread the love and spread the music, presenting audiences with the likes of Diplo, Dom Dolla, Yeat, Denzel Curry, Aitch, Kaytranada, JK-47, Ninajirachi, Kota Banks, Honey Dijon and BENEE. Joining the party will also be Young Lean, Shygirl, Remi Wolf, Kanine, SG Lewis, and many more. Attendees should get set to experience a vibrant oasis, filled with some of the biggest and most...

Sydney's biggest New Years festival Field Day has this morning revealed their massive 2023 line up. Set in the heart of Sydney on New Years Day, the festival has seen some of the biggest acts in the world perform, including Cardi B, Tyler, The Creator, Playboi Carti and Skepta in recent years. This years festival will see the return of Diplo, Kaytranada, BICEP, BENEE, Patrick Topping, Yung Lean and many more to Australia.  The line up also includes local superstars...

SPLENDOUR IN THE GRASS 2022FULL LINEUP ANNOUNCEMENTFriday 22 to Sunday 24 July 2022Pre-loved tickets onsale from 9am AEDT Monday 6 December via Moshtix    It’s finally here! The news we’ve all been waiting for… the complete lineup for Splendour in the Grass 2022 is now signed, sealed and set to be delivered to the festival faithful from Friday 22 to Sunday 24 July 2022. It’s been quite a ride and we can’t wait to welcome you all back...

BLUESFEST have made a powerful final addition to their 2021 lineup with the uber-talented Bundjalung indigenous rapper, JK-47!    Whether you know him as the 2020 Triple J Unearthed Artist of the Year, or from his jaw-dropping Like A Version where he put a fantastic twist on 'Changes' by 2Pac, you would already know that JK-47, uber-talented Indigenous artist, is a force to be reckoned with. It's no surprise to see acts like Illy, ChillinIT, Briggs...

That's just the way it is / Things'll never be the same  Just last year JK-47 was awarded the 2020 for Unearthed Artist of the Year… Seems like a long time ago, but it’s just been one of those years. “Yeah, it was a big year for me,” says the MC. “A lot of holdups and a lot of great things happened too.” The great things include getting married and having a son, who’s now seven months old. “I'm just...